The world is still slightly too much with me, so I am spending my August re-reading and writing about the books of Janet Lambert. So far, I've made my way through the first ten or so in the locket series, which comprises the army-life adventures of the Parrish and Jordon families (as well as a little Candy Kane thrown in).

The first part of this reading project took me through the adventures of Penny Parrish as she grows up, finds her career, marries producer/playwright Josh MacDonald and starts a family. We also meet Carrol, Penny's rich and beautiful friend who marries Penny's brother David and starts a family of her own. We also get introduced to the Jordons, and Jenifer, the eldest, who takes care of the whole large and complicated  family.


But first! A note from Janet Lambert, from Little Miss Atlas, in which she expresses her appreciation for her fans. 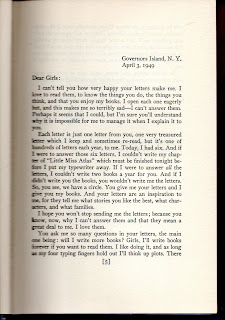 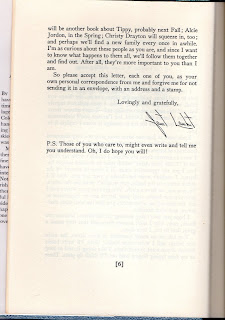 This second run of books starts with Miss Tippy (1948 - #12), which introduces us to the adventures of Penny Parrish's little sister Tippy, who is just turning sixteen, the age that Penny was in the very first Parrish book, Star-Spangled Summer. Tippy was just three in that book, so she's come a long way. Miss Tippy is quite a bit about how Tippy (sometimes unsuccessfully) is trying to grow up before her time, finding her place in the world, handling serious family issues, and coping with the family's upcoming deployment to Germany.

In Little Miss Atlas (1949 - #14), which picks up immediately after Miss Tippy, we find Tippy arriving in Germany and adjusting to life in Garmisch--the devastation, the isolation, and of course, the attentive Ken Prescott. Brother Bobby and her dear friend Alice Jordon come to visit, Tippy almost heads home, but decides to stay and tough it out.

Confusion by Cupid (1950- #15). brings us back to America and returns us to the Jordon family. This book starts with Peter, still stuck on Tippy Parrish, and Gwenn impetuously marrying spoiled child star (now grown up) Bill Hanley. During all of the drama, Alice finds Jonathan Drayton to be a strong shoulder to lean on--far stronger than Bobby, who is off at West Point. [After reading this one, I realized I probably should have read Where the Heart Is (1948 - #11), Drayton Family book, because it introduces characters Bill Hanley and Jonathan Drayton. Oh well!]

Next up is The Reluctant Heart (1950 - #17), which follows the adventures of Penny and Josh as they sort out marriage, children and balancing it all with a career. Bobby is at West Point, Tippy and her parents are still in Germany, and Carrol is having a nervous collapse after suffering through her son Davy's struggle with polio. The book ends with Penny happily on the stage, her family with her in New York and the Parrish family coming back from Germany.

So looking at the series, and the fact that Confusion by Cupid ends with Peter Jordon seeing Tippy Parrish coming off the plane from Germany, and The Reluctant Heart ending with Tippy coming home the next day, it seems as though these books occur simultaneously. And the biggest mystery of all? There's no locket #16! What?

Now, we head right to Miss America (1951 - #21), which picks up immediately where Confusion by Cupid leaves off. The primary drama in this novel is in Tippy's adjustment to life in America again, and in the country's preparations for war as her family, including Ken Prescott, prepare to be shipped to Korea. She's also dealing with Alcie being more ready for love and marriage than she is, as she's become very devoted to Jon Drayton. With so much change in the air, this is an transitional novel in the series.

Oh dear. It's time for Don't Cry, Little Girl (1952 - #23), which begins with a rapturously happy Tippy and Ken visit in Washington, D.C., Tippy settling into college and life, then getting the news that Ken has been killed in Korea. Having read most of these novels before, I knew Ken's death was coming, but it's still incredibly sad and touching. Lambert does a gorgeous job through these novels of building a beautiful, but young relationship that is destined for sadness, all the while knowing that there will be ...

A Rainbow After Rain (1953 - #25). And there is. Tippy gets a job, which she doesn't like all that well, is still in a muddle about what to do with her life and herself. Peter comes back from Texas and gets her all confused, and jealous and feeling guilty and finally the sunshine breaks through and she proposes to Peter. As the book ends, she is putting away Ken's picture and planning her marriage to Peter.
Posted by Carly