Confusion by Cupid by Janet Lambert (1950)

Gwenn Jordon missed no opportunity to remind her step-brother, Peter, that his favorite girl, Tippy Parrish, had found a great admirer in young Lieutenant Prescott in Germany, and as the present story opens Peter is thoroughly mad. Especially at women. If it had not been for Alice, his other step-sister, he didn't know just what he would do. Of course, there was a pretty little lass from out of town, but just how much did she count?

Meanwhile Gwenn and Alice went to a house party at Bill Hanley's where Alice was to have been the guest of honor. Gwenn, however, having just fallen out with her own fiancé, decided to get even with him by making herself the belle of the house party.

After that what happened? Was Alice, sweet, reliable Alice, able to extricate her thoughtless sister from a wretched situation that jeopardized the happiness of two families? And presently just how did Bobby Parrish feel when he found Alice admitting that Jon Drayton (remember Christy Drayton's brother?) was an awfully nice chap? And what finally became of the lad to whom Gwenn had been engaged? Truly--all was confusion--with Cupid hanging his head in discouragement.

All ends well though, as it always does in Janet Lambert's inimitable stories for girls, with all the characters settling finally into their perfect if unpredictable positions in the intricate pattern woven for them. (from the inside flap)

Confusion by Cupid opens with Peter Jordon in a drugstore, stewing about an argument he had with his sister Gwenn, where she tries to get him to go out with her friend, despite his continuing devotion to Tippy Parrish. He meets Maxsie in the drugstore and:

The world is still slightly too much with me, so I am spending my August re-reading and writing about the books of Janet Lambert. So far, I've made my way through the first ten or so in the locket series, which comprises the army-life adventures of the Parrish and Jordon families (as well as a little Candy Kane thrown in).

The first part of this reading project took me through the adventures of Penny Parrish as she grows up, finds her career, marries producer/playwright Josh MacDonald and starts a family. We also meet Carrol, Penny's rich and beautiful friend who marries Penny's brother David and starts a family of her own. We also get introduced to the Jordons, and Jenifer, the eldest, who takes care of the whole large and complicated  family.

By all the rules Tippy Parrish should have been having a perfectly marvelous time. Here she was, in a beautiful little village in the Bavarian Alps where her father, Colonel Parrish was stationed; she had a handsome young American lieutenant paying her flattering attention; she danced and skied and skated the days away. But Tippy was not happy. And why?

The Parrishes again, and this time Tippy, "going on" sixteen just as Penny was in Star-Spangled Summer, the book which opened that series. As always in the Parrish clan, many things happen at once: Tippy sends out invitations for a birthday dance on Governors Island; Colonel Parrish is ordered to Germany; and suddenly tragedy stalks into the gay Parrish household.

For a long time Tippy has been smarting under the failure of Trudy, the beloved colored cook, to call her "Miss Tippy." Trudy is all-wise, all-knowing. When Tippy ceases to be a headstrong, teasing, little flitterfly, says Trudy, and takes on a bit of sorely lacking dignity, she will be called "Miss Tippy," but not until then.

The world is slightly too much with me, so I am spending my August re-reading and writing about the books of Janet Lambert. In addition to the detailed posts on each novel, I'm updating this post as I make my way through the series.

Although Janet Lambert has written a ton of books (Stories about teenagers...written specially for teenagers), her books about the Parrish, Jordon and the Kane families are the books I've loved since I was a child. Set (and written) during World War II and after, they encompass the world of the U.S. Army as well as the world of American Theater. What could be better?

No young girl who ever has longed to know the mystery of the world behind the footlights will be able to put down this new story about Penny Parrish and her first exciting experiences on Broadway.

After working hard all summer in a stock company, Penny finds herself in the cast of the show, The Robin's Nest, due to open on Broadway. There she meets Josh Macdonald, the blunt, weary-looking stage manager, who takes a keen interest in her success as an actress--although he is surprisingly indifferent to her as an attractive young girl!

Candy Kane again, and this time in California. Barton, who in WHOA, MATILDA! shared ownership with Candy in their battered jeep, is now on his way home from the war in the Pacific. When he arrives he finds Candy completely absorbed in the career of a race horse named Mister Smith, owned by an engaging old man who can not afford to have him trained and "handled." Barton does not share Candy's zeal in the project at first, but in spite of himself he becomes interested.

The result is that, in spite of a serious quarrel which almost spoils everything, Mister Smith wins an important race at Santa Anita to the boundless joy of the old man and Candy and Barton. The quarrel is made up and the ending is on a high and happy note.

Alice Jordon was a typical "Friday's child" for she was "loving and giving," especially where her sister Gwenn, vain, selfish and clever, was concerned. Another "Friday's child" in the huge Jordon family was the eldest sister, Jenifer. Jenifer held the family together and Alice, happy, completely unself-conscious, was her able lieutenant.

Now Penny Parrish must make a choice. Who will it be? Is she going to marry Michael Drayton? Or will it be handsome Terry Hayes? Or how about Josh MacDonald, her manager? In this book we find Penny, again in the theater, making more and more friends, deciding against Hollywood, and dividing her time busily between the family home on Governors Island, where her father is in command, and her sister-in-law Carrol's apartment in New York. 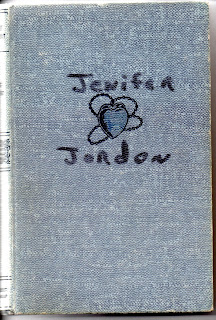 With Just Jenifer, Janet Lambert introduces the Jordon family to her readers. As the book opens, sixteen-year-old Jenifer Jordon is taking care of her many brothers and sisters in Orlando. Her father General Jordon is off in Italy fighting in the war. Things get increasingly complicated when their housekeeper has to leave for a family emergency, and Jenifer is left to care for the family alone.

Everyone who has read CANDY KANE has kept her fingers crossed that the irrepressible Candy would somehow continue her helpful, hopeful, unpredictable ministrations to her difficult family at Fort Benning. And here she is! This time the Kanes are living in a hotel in crowded Washington, awaiting Colonel Kane's orders to leave on what turns out to be a highly secret overseas mission. Barton Reed is now a full-fledged private first class, and owns a hysterical old coupe named Matilda. Matilda lacks figure, dignity and self-control, and eventually becomes Candy's most prized possession--because Bart can see no possible way of keeping the delightful old jalopy now that he is in the Army.

Candy wasn't as pretty as her sister Leigh, but she had a wistful little combination of something else in her make-up that made people love her and trust her and want her to be around. At Fort Benning, for instance, where Major Kane was stationed, Candy was absolutely essential to the success of every party or outing. Leigh and Mother, however, were of another stripe, and made the going rather difficult for everyone . . . especially for a certain young soldier. Later on, in fact when it was much too late, they discovered their mistake and from a distance Candy could smile her quiet, small, happy smile.

In Glory Be! Penny and her friend Carrol encounter more serious grown-up problems, but they never lose any of their charm, wit, and sense of excitement with life. The story opens with Penny's eighteenth birthday party, which is followed by a shopping trip into New York with Carrol. The carefree time of the girls is interrupted, however, by the tragedy of Pearl Harbor. From that fateful day, events move fast for the Parrish and Houghton families. The lives of the girls are suddenly transformed and they need all the character and courage they have built up to face the uncertainties and heartbreaks that war brings. With unique understanding of a young girl's heart, Janet Lambert shows how the girls meet tragedy and come through with a deeper maturity.

Dreams of Glory by Janet Lambert

Here again is another story of the adventures of the irrepressible Penny Parrish and her delightful family. By one of those happy accidents best known to fiction, Major Parrish has been transferred from Fort Arden, Kansas, to West Point, where all concerned can keep an eye on David, the family's cadet. And happily, Penny's friend Carrol Houghton lives in an enormous barn of a place not far up the Hudson from the Point. So it is not surprising that the two girls are together constantly.

Email ThisBlogThis!Share to TwitterShare to FacebookShare to Pinterest
Labels: Janet Lambert, Penny Parrish series, Reviews
Newer Posts Older Posts Home
Subscribe to: Posts (Atom)
"Besides, Joe's is the favorite hang-out of the high school crowd. Simply everyone goes there after school, even if they're so broke they can't afford anything but an ice cream cone. The place is always full of noise and color and movement, bright sweaters and plaid skirts and blue jeans, the juke box blaring, the lovely aroma of hamburgers making you drool." - Class Ring by Rosamond du Jardin