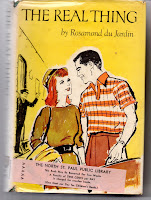 The summer after graduation from high school can be the shortest summer of a girl's life, especially when her favorite man is going to a different college.  Tobey Heydon found that September came too soon and that saying good-bye to Brose was much harder than she had expected.  Tobey and Brose had decided not to let their relationship stand in the way of new friendships at college, but their sensible decision didn't make the separation any easier.

College proved to be even more exciting than Tobey had foreseen.  Rush Week, classes and roommates kept her from thinking too much about Brose during the first hectic weeks.  The week ends were filled with sorority activities and dates with a variety of new and interesting college men.  But in spite of the fun of being a freshman, Tobey looked forward to vacations.

She missed her family--even her little sister Midge, who had stopped being a pest and started asking for Tobey's advice--and she missed Brose.  As the year went on, Tobey began to realize that the new friends and new experiences of her freshman year had not changed her mind about Brose or about their future.

Readers of Practically Seventeen, Class Ring and Boy Trouble will welcome another story about Tobey, whose feelings and problems ring true to all girls.  (from the inside flap)
Posted by Carly