"Jane Purdy is fifteen and a sophomore in high school. No one has ever asked her for a date except George, an unromantic boy who is an inch shorter than she is and talks of nothing but his rock collection. Then she meets Stan: tall, good-looking, resourceful, and sixteen years old--all she ever dreamed of. The circumstances are trying. Jane is baby-sitting with Sandra Norton, the toughest assignment in town. Stan appears just in time to prevent Sandra, by a skillful use of pig Latin, from emptying a bottle of ink on the Nortons' blond living-room carpet. But I'll never see him again, Jane tells herself despairingly the next day. I'm just not the type to interest an older man. And then one evening the telephone rings . . . " (dust jacket copy)

Finally!  A fifties teen romance actually written in the 1950s!  And possibly one of the most charming teenage novels ever written.  Beverly Cleary is mostly known for her children's books starring such memorable characters as Ramona, Henry Huggins, and Ralph S. Mouse, but she also wrote several heartfelt and funny teenage romance novels, the first of which is this one.  As the dust jacket copy on my copy reads, "It is hard to think of any other American writer who has so successfully put on paper the sorrows and joys and absurdities of girlhood."

The novel starts with these lines: 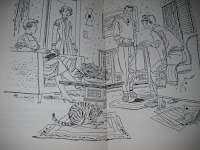 And believe it or not--she does!  And not just any boy, but Stan Crandall, who is "at least sixteen, because he had a driver's license.  He had a nice smile and merry eyes--greenish-gray eyes.  He had brown hair with a dip in it.  He was not really tall, but he was tall enough so a medium-sized girl could wear heels and not feel she had to scrooch down when she walked beside him."  And he's a nice boy, which is apparently what girls were looking for in the 1950s.  I think I still have a little crush on Stan Crandall and his tan arms and silver identification bracelet.  Dreamy!

So we go through Jane's trials and tribulations when dating a boy seriously for the first time.  How to behave on her first real date, what to order at Nibley's ice cream shop, how to stop her parents from alternately teasing her and worrying about her, how to get through dinner at a real Chinese restaurant in the city, and what happens when he doesn't invite her to the big dance. 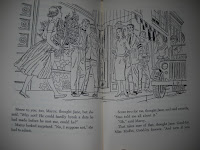 The charms of this book are many.  Not only does the book explore the heartfelt issues behind dating and really liking someone for the first time, but Jane also learns about who she is as a person.  But it's not all earnest -- there's quite a bit of subtle humor in the book, especially in Jane's interactions with her parents, who just don't understand, as well her babysitting adventures.  Jane has a sense of humor about herself as well.  In a scene where she orders flowers for Stan after an operation and receives a massive gladiola arrangement she has to hand-deliver to him:


"Since she had made up her mind to be herself and since she was the kind of person who always did the wrong thing, Jane decided she might as wll make the best of it and start out by delivering the flowers to Stan."

The book also has a marvelous sense of place.  It's set in a suburb of a West Coast city (probably San Francisco), which has all the advantages of a small town (in the 50s, that is), which means walking to the movies and ice cream shop from home.  Everyone has lovely golden tans, and gracious old redwood homes abound, as well as the "nodownpaymenttoveterans" houses owned by Jane's babysitting clients.  The line drawings, by Joe and Beth Krush, beautifully capture the time period, from Jane's clothes to the decor at her house when Stan comes to pick her up.  It's also an evocative look at (sheltered, middle class) teenage life in the 1950s.  Before their first date, Jane starts to worry about Stan:  "What if he came in a T shirt and jeans?  Or one of those gaudy sport shirts with the tail hanging out?  . . . Or maybe he would chew gum and snap it and guffaw at the love scenes in the movie."  As for dinner in the city?  Jane wears a suit and white gloves, but makes the major decision to go hatless.  At the end of the book, Stan gives Jane his identification bracelet, which means they're going steady. 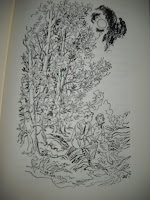 "Jane's wrist felt small and feminine in the circle of heavy silver links.  Tenderly she caressed the letters of Stan's name with her finger tips.  Stanley Crandall.  The nicest boy in the whole world."

Sigh!  Even though the trappings are charmingly dated, certain truths about young love always ring true.  Beverly Cleary had an amazing gift of insight into the minds of children with her books for audiences, and her teenage novels are no different.  I only wish she'd written more than four.  They are still in print and hopefully, they still speak to a contemporary audience.

Despite the incidences of angst and drama, these novels are still like riding in a powder-blue convertible on a sunny day with a nice boy who has a dip in his hair, and golden-brown hairs on his tanned arms.
Posted by Carly

Add comment
Load more...
Newer Post Older Post Home
Subscribe to: Post Comments (Atom)
"Besides, Joe's is the favorite hang-out of the high school crowd. Simply everyone goes there after school, even if they're so broke they can't afford anything but an ice cream cone. The place is always full of noise and color and movement, bright sweaters and plaid skirts and blue jeans, the juke box blaring, the lovely aroma of hamburgers making you drool." - Class Ring by Rosamond du Jardin